The year is 1985 and Hendrik Marais is busy in his paint and hardware store with the tedious task of purchasing nuts and bolts, screws, and nails in large quantities from wholesalers. 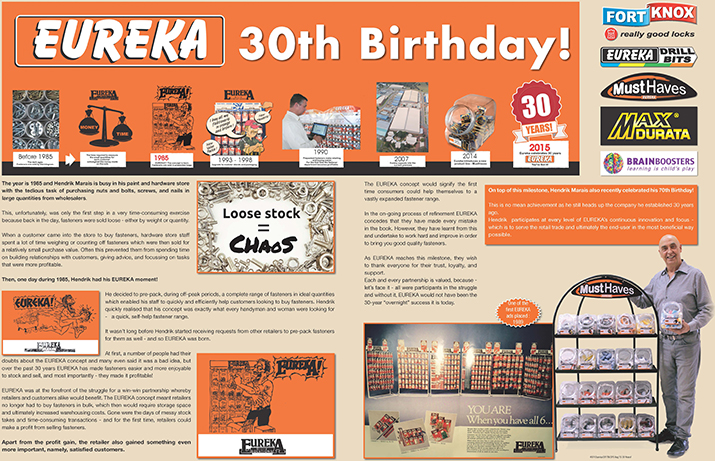 This, unfortunately, was only the first step in a very time-consuming exercise because back in the day, fasteners were sold loose - either by weight or quantity.

When a customer came into the store to buy fasteners, hardware store staff spent a lot of time weighing or counting off fasteners which were then sold for a relatively small purchase value. Often this prevented them from spending time on building relationships with customers, giving advice, and focussing on tasks that were more profitable.

Then, one day during 1985, Hendrik had his EUREKA moment!

He decided to pre-pack, during off-peak periods, a complete range of fasteners in ideal quantities which enabled his staff to quickly and efficiently help customers looking to buy fasteners. Hendrik quickly realised that his concept was exactly what every handyman and woman were looking for
- a quick, self-help fastener range.

It wasn’t long before Hendrik started receiving requests from other retailers to pre-pack fasteners for them as well - and so EUREKA was born.

At first, a number of people had their doubts about the EUREKA concept and many even said it was a bad idea, but over the past 30 years EUREKA has made fasteners easier and more enjoyable to stock and sell, and most importantly - they made it profitable!

EUREKA was at the forefront of the struggle for a win-win partnership whereby retailers and customers alike would benefit. The EUREKA concept meant retailers no longer had to buy fasteners in bulk, which then would require storage space and ultimately increased warehousing costs. Gone were the days of messy stock takes and time-consuming transactions - and for the first time, retailers could make a profit from selling fasteners.

Apart from the profit gain, the retailer also gained something even more important, namely, satisfied customers.

The EUREKA concept would signify the first time consumers could help themselves to a vastly expanded fastener range.

In the on-going process of refinement EUREKA concedes that they have made every mistake in the book. However, they have learnt from this and undertake to work hard and improve in order to bring you good quality fasteners.

As EUREKA reaches this milestone, they wish to thank everyone for their trust, loyalty, and support.

On top of this milestone, Hendrik Marais also recently celebrated his 70th Birthday! This is no mean achievement as he still heads up the company he established 30 years ago.

Hendrik participates at every level of EUREKA’s continuous innovation and focus - which is to serve the retail trade and ultimately the end-user in the most beneficial way possible.

Each and every partnership is valued, because - let’s face it - all were participants in the struggle and without it, EUREKA would not have been the 30-year “overnight” success it is today.